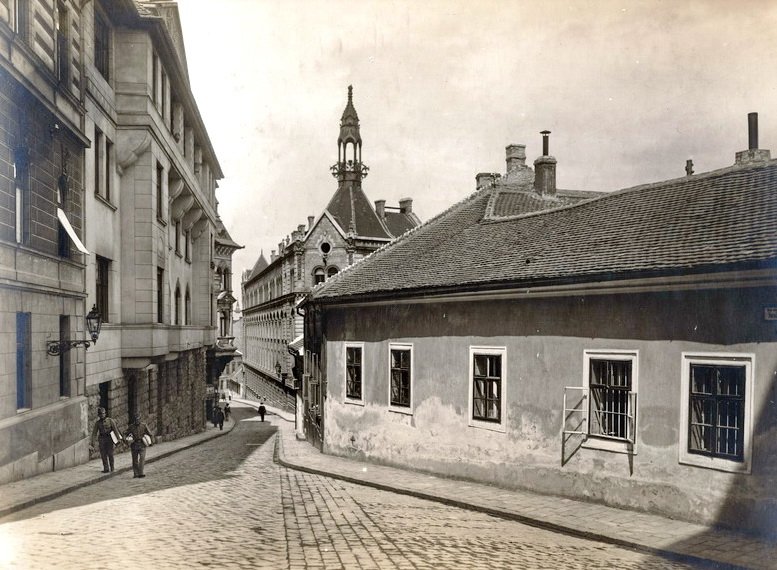 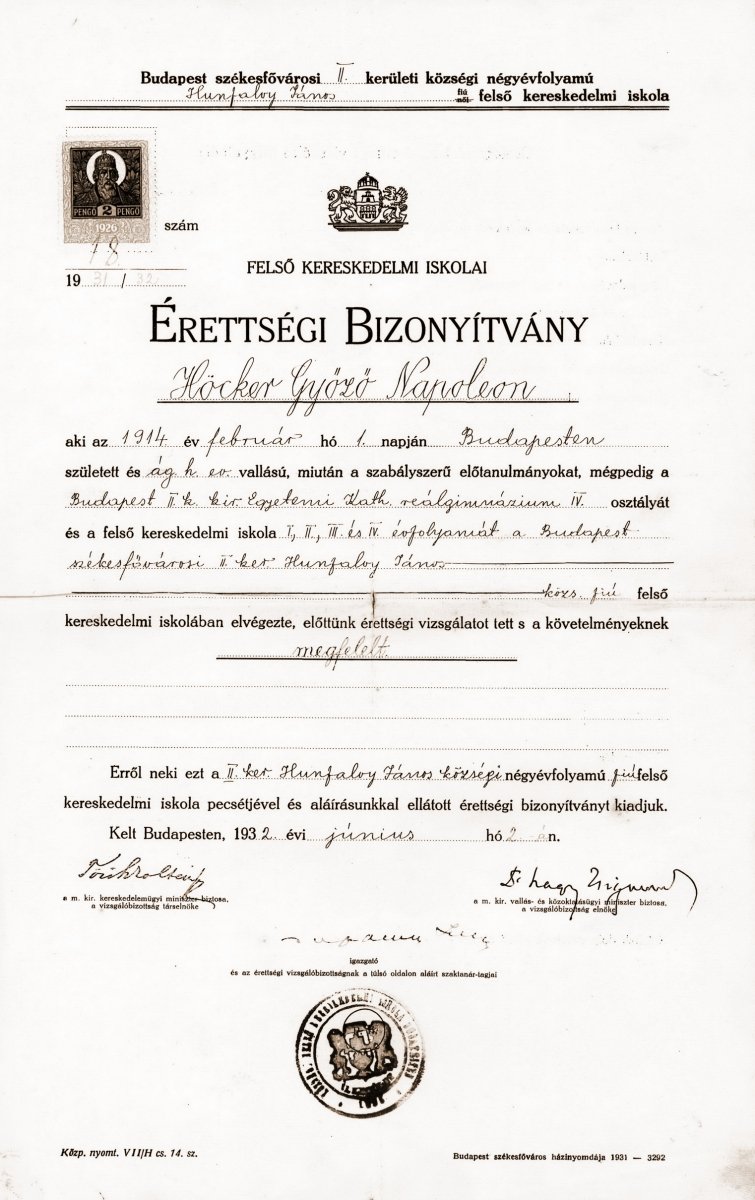 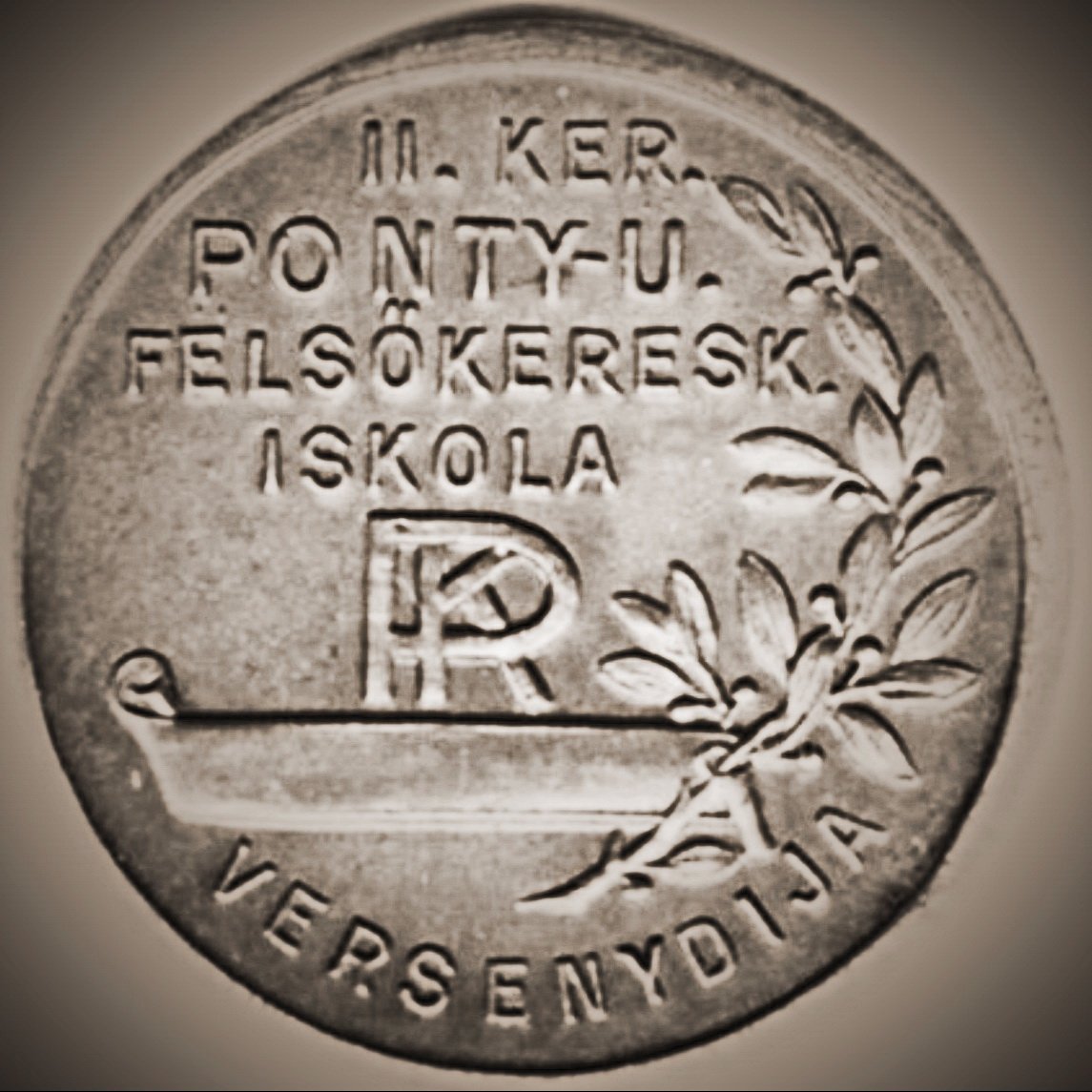 Our school was founded in 1884, and with this act János Hunflalvy’s proposal, which had been made in front of the members of the Civil Circle of Buda, could become a reality. In 1885, the school received the title Commercial Secondary School and a decade later, the school became a higher commercial school.

The construction works started at the corner of Szalag and Ponty street on 12 September 1898. The building was roofed by December and the school opened its school year in 1899 in the new building. The flag of the school was inaugurated on 26 May 1907.

The main objective of the school was from its foundation on to provide a professional training for the children of lower middle class families; the initiation fee was 20 korona and the tuition fee was 200 korona. From the very beginning on, typically, the children of the clerks and office-holders chose this school but the ratio of the children of handicraftsmen got higher and higher.

World War I influenced teaching directly, 7 teachers went to war, one teacher was captured and was missing, dr. János Lányi died a hero and 10 pupils were killed in action on the fronts. There were some difficulties during the school years after the war due to the change of teachers, the lack of fuel for heating and the unplanned school holidays because of the Spanish flu epidemic. The reduced rates of the tuition fee tried to mitigate the problems caused by the economic situation: “War orphans and the children of war victims with excellent or good results” did not have to pay an initiation fee. The ratio of the recipients between the two world wars was around 30%, except during the 1943-44 school year when it reached 46%.

The most important major change in the system of secondary vocational education was that the higher commercial schools became four-year-long in 1920 instead of the previous three-year system. As a result, the number of pupils attending the school grew continuously and in parallel with that, the school building got extended. Furthermore, electrical lightning was introduced. From the 1927/28 school year on, the curriculum of the higher commercial schools became the same and the teaching of modern languages had an important role. The content of teaching had changed significantly, too. Reflecting the situation after Trianon, the ratio of value neutral subjects decreased and the Christian-national spirit became stronger. The school doctor system was established in the school year of 1927/1928. The writer Dr. László Németh was the school doctor here between 1931 and 1942. He put special emphasis on informing parents and making tuberculosis tests regular.

The global economic crisis between 1929 and 1933 and its consequences resulted necessarily in a new situation regarding education. The Youth Aid Association organised regular book aid programmes and the new tasks were phrased in their year book the following way: “These children mustn’t be compared to the decreasing number of school children who could learn a foreign language in a playful way in their childhood guided by pedagogical mentors, private tutors and teachers who helped them to break up the hard soil.” If we also consider the depressing economic situation, with which most pupils have to struggle, we can understand the heroic fight of the teachers when they have to carry on a day by day struggle for making the books available for children.  Despite these sad facts the results of the children this year (1930/31) showed an increasing tendency.”

In the school year of 1934-1935, the school celebrated the 50th anniversary of its foundation in the building of Buda Vigadó.  A marble plaque was placed inside the building to the memory of the school mates who died during World War I.  From 1935 on, the Lord Mayor ordered the introduction of teaching film art; our pupils had excellent results in sport: they won the team competition of horizontal bar, flying rings and hanging. Jenő Knaiter became a champion in free exercise.  From the end of the 1930s on, it was more and more difficult to organise school excursions. As a result, the importance of watching educational films and going to the theatre increased. Yet, it could come to the visit of the towns in Upper Hungary which became a part of Hungary again during the course of the first country increase (Kassa, Érsekújvár, Komárom). Altogether 300 pupils took part in the programme.

At the end of the 1930s, the preparation for the war became more and more perceivable in the life of the school, too.  The members of the Scout Community carried out civil defence duties from the autumn of 1939 on, and their water patrol was on service on the Danube from 1942 on, because they had been able to  buy a 10-person patrol boat with the help of the capital. Besides all these, the military drilling of the pupils by the Levente organisation got accelerated from 1943-44 on and they had signal corps training, too.  More and more teachers were called up for military service.

In the middle of October 1944, the education had to be suspended as the school building was required for military purposes.