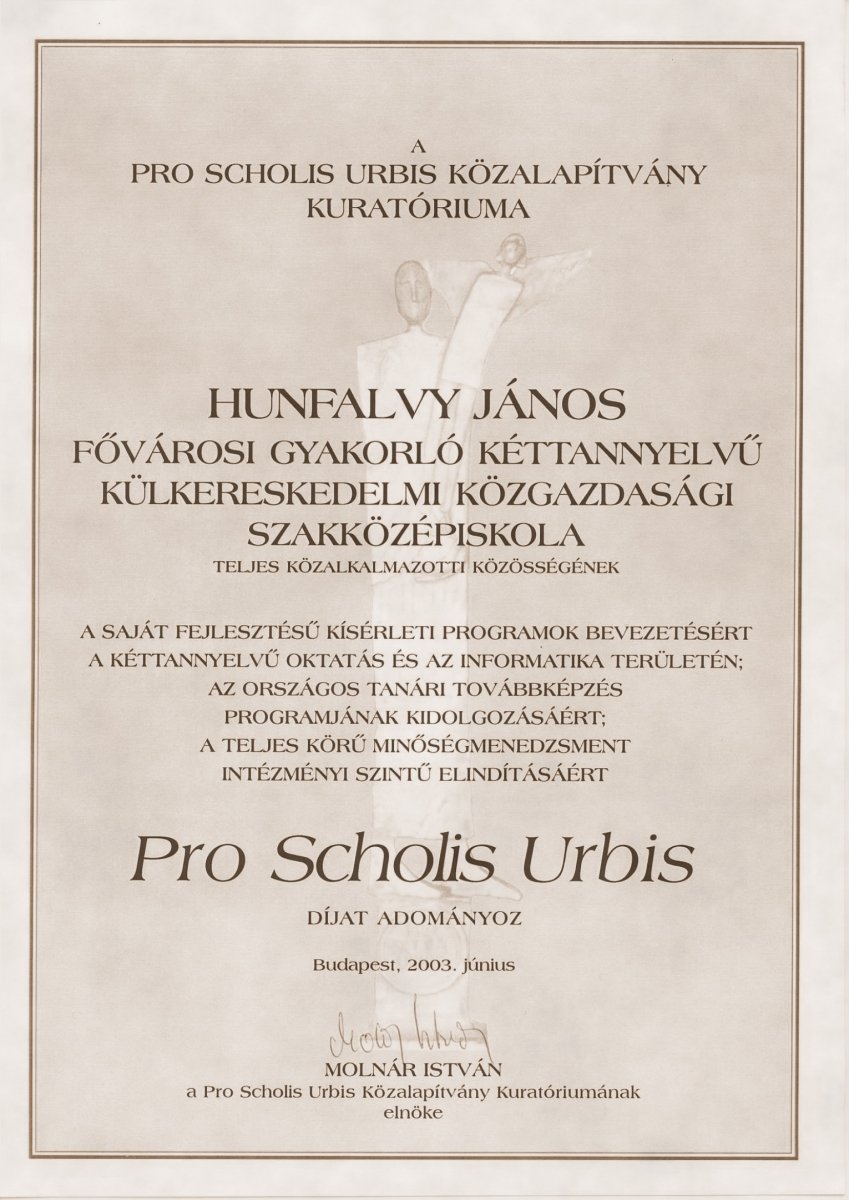 Since 1997 our students have had an opportunity to complete hostess and tourist guide courses.

In 1992 the Junior Achievement program, with the support of the Soros Foundation, started at Hunfalvy, which aimed to facilitate the development of students’ entrepreneurial skills. In recognition of the results achieved in the field of vocational training Béla Kádár, Minister of

As regards foreign language teaching in this era, the introduction of bilingual education brought a major change in 1987 in German, in 1990 in English and in 1998 in the French language. Our international relations were enhanced by student exchanges  - including partner schools in Bad Neustadt, Miercured Ciuc and Dijon, as well as our to winning Leonardo-tenders. In the latter ones we worked in cooperation with Belgian, French, Dutch, Polish, German and Swedish institutions, and several members of the teaching staff were involved in this collective work. Our students could prove their language skills in after-school events as well, e.g. in 1995 Language Days were held, where we invited the English, French, Japanese, German and Russian ambassadors. In the new millennium we became an accredited TELC and KIT exam venue, which enhanced further the reputation of the school. In 2004 we entered successfully for the World-Language tender announced by the Ministry of Education and won the European Award for Languages.

Meanwhile, the School Board, which is the forum for reconciliation of interests of the companies cooperating with the school, the parents and the school staff representatives, took up its duties. In the 90s the school’s own publisher and printing shop were set up, and the Hunfalvy newsreel was broadcast regularly, in 2000 the 50th news programme. Our Drama Society presented its performances with great success year after year: King Stephen or Godspell were lifelong experience for many. The drama group received an Award for Excellence for these plays. In 1999 the 9th graders’ drama exam was introduced, which has become part of the school traditions. Also in the 90s, the first freshers’camp was organized in Búbánatvölgy. In the spirit of continuous renewal and meeting the requirements of our surroundings we launched the Comenius I. quality improvement program in 2001. In 2003 we joined the European Network of Innovative Schools. On the occasion of Hungary’s EU accession our classes took part in a longer series of competitions.

As the operation of the school became more diverse, the building also had to be expanded.

Teaching in the converted loft started in 1987, then in October 1996 the ribbon cutting ceremony was held in the new wing housing the gymnasium and the school training office.

In 1999 the old part of the building regained its former decoration, the spire.

During the years between 1985 and 2004 the achievement of the teaching staff was recognized with several honours. In 2003 the capital awarded the Pro Scholis Urbis prize to our school for our results.